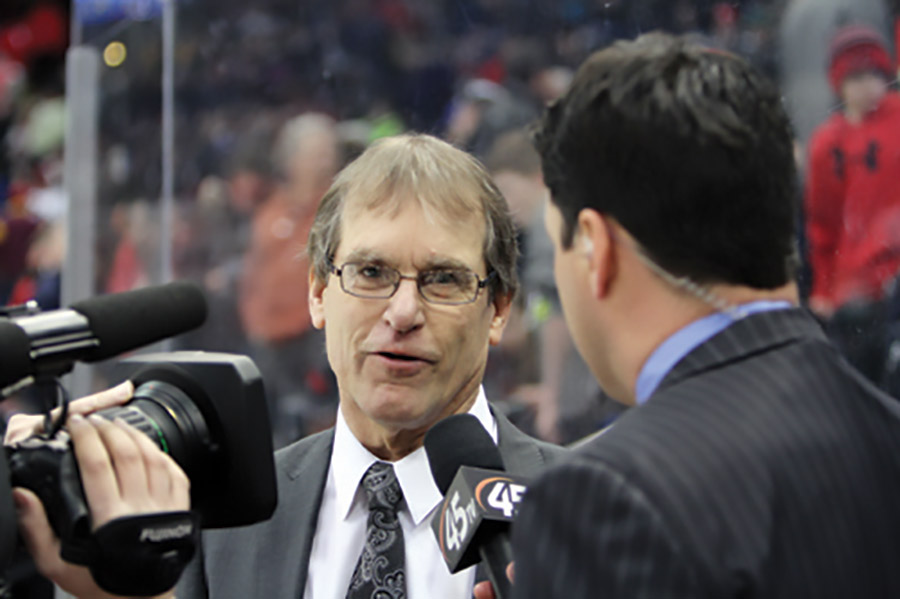 I often read an article about a well-known coach that is successful and I cut out pieces of it to add to my “collection.” I’ve been on this search for what makes coaches great for years, actually it’s probably been decades. I remember many years ago thinking to myself, “What makes this average looking man so revered and so successful?” The man I was looking at was Vince Lombardi.

I must admit that I still have not found all of the pieces of the puzzle, but many common denominators certainly have continued to surface. Part of the problem with finding one “model” is that there is no one model. It certainly is true that Bobby Knight had a very different personality and approach than, say, Bob Johnson did. Knight was really not a great deal different from other well-knowns such as Lombardi and Lou Holtz, however.

I realize that I cannot operate as a coach the same way that the professional coaches (college, junior, pro) do. For starters, they focus on coaching as their jobs. For another, they have more (but not full) control over the players that are on their teams. I probably have spent more time than most youth coaches studying all aspects of coaching. Most of you only have a limited amount of time to study, improve and excel.

I would like to strongly encourage each of you, however, to take some reasonable time before the next season starts to identify some of the things that will make you better as a leader, communicator and coach. That goes for coaches at the junior, college and pro level as well. It’s not enough to prepare drills for practices and work on skills and systems. There is more to it. Players need to have fun and enjoyment. They need to get self-confidence and learn things that they can take through life. This is true from Mites through college hockey (probably not so much in the pros).

Let’s take a look at some of the most important items, traits, and approaches that I have stored away in my coaching excellence notebook over the years.

Discipline – I don’t think there is a top coach in any sport that doesn’t demand discipline. Discipline means players individually, and as a team – and of the coach. It is, in my opinion, impossible to be successful without discipline. This is something special that a coach can help teach team players that will stick with them for life. Set the rules, explain the rules and demand they be followed. Firmness is something many youngsters are not used to. Hard work is part of discipline. A lazy teacher really lacks discipline. I want my players to remember when they are 25 or 30 years old that they learned something about discipline from me. I also want them to remember that I had discipline – good organization, well prepared, good systems to teach.

Fairness – This goes right along with discipline. It is impossible for a biased and unfair coach to have discipline. Fairness means that everybody is treated evenly and with respect, or at least with the same respect that they show. It doesn’t mean that everybody deserves or gets the same amount of ice time. Fairness is not socialism. It does mean that every competitive player gets a fair shot and a fair chance to improve.

Confidence – Great coaches are confident of themselves, are realistically confident of their players and can build self confidence in their players. That may be the most important aspect -building player self-confidence. Invariably, however, great coaches have a small percentage of players that cannot handle the other traits and aspects and therefore cannot maintain self-confidence. They are generally the ones that you hear about leaving programs for “less pressure” programs.

Perfection – Perfection to these great coaches generally means playing up to capabilities. You will hear them discuss this concept quite often. That doesn’t mean that they don’t expect improvement and conformity to the coaches’ systems. Coaches don’t want to have to ask their players to try hard and do their job at any level.

Fun and enjoyment – Enjoyment is much more important than fun to most players. Young players (up to10-11 year olds) want fun, but after that they really mean enjoyment. It’s not very enjoyable to have poorly-planned practices, to lose all the time, to have few goals and little focus. Great coaches make certain that there is some fun every day. They also make certain that the players understand the team and individual goals and how the team is going to progress toward those goals. Great coaches are very goal-oriented and can get their teams to be the same.

Work ethic – Work ethic is, as previously discussed, part of discipline. It also involves planning and running high-tempo practices, but not grinding practices. Great coaches do not overwork their teams. They work them hard and “crisply.” Surprisingly, very good youth coaches seldom do “conditioning drills.” As Greg Trebil (a former Holy Angels High School coach) once told me, “My whole practice was a conditioning drill and I expect game level effort at practice.” Players should be spent but feel good when practice is over. I learned a great deal about getting players to work hard when I ran my Russo Hockey Training Programs skating sessions years ago. We skated for nine weeks with no games in between. The only player motivation was the faith that they would improve dramatically and have a much better season. I’ll guarantee you that my on-ice coaches were challenged every day to maintain good work ethic.

True feelings – Great coaches also have strong feelings for their players. They tend to have players that feel the same about them. It is impossible to have bad feelings about players without them knowing it. Coaches have to like young people and to look for the good in each of them. With a few exceptions, this is very possible. Players need to feel good about themselves and need coaches that can help, not hinder that feeling.

Love for the game – The more informal activities that a coach can create, the better. I think my love for the game came as much from my outdoor boot and backyard hockey as from the formal hockey teams. My top remembrances from playing include many outdoor (no parents) situations. I have two “relaxation images” that I use – one of them involves an outdoor rink at night with lights on and seeing the players’ heads and shoulders moving around as I approach. I also believe that a good ending drill for each practice and more developmental shinny games are good “love for the game” activities.

Coach for the right reason – I see many coaches that feel just like I do. They enjoy going through the gate every day and interacting with wonderful young people. I also occasionally see angry coaches or coaches that spend only the required minimum amount of time at their coaching job. I don’t believe that coaches without enthusiasm or love for the game, as well as love for youngsters, do a very good job. It takes a real commitment to do all of the other (above) right things as well. Enthusiasm is a real key ingredient. It creates energy that players can feel and that players can pick up. Teams with energy and pace come from coaches that feed that energy and pace to their players. I’ve said for decades that a head coach was to make “fire (energy) come out of their fingers and into their players” to truly be successful. When a coach loses the fire, it’s time to retire.

A bad coach is worse than none. A good coach is a gift to the team and its individuals. Well, there are many more pages in my notebook, but this is surely enough to help you get some good ideas for the next season. Start thinking about it now – plan ahead. If you dedicate yourself to have fair discipline, to love your players, to work on every player’s self-confidence, and to have good fun and enjoyment in 2015-16 – and it works – drop me a line. I’ll pass it on in my column.

This article is part of Chapter 1 of John Russo’s new book, “Best of the 26 Years of John Russo’s Coaches Corner.” This “must-have” book for coaches is available online at www.russocoachescorner.com or call 952-944-7137 to order.

John Russo, Ph.D., is founder and director of the Upper Midwest High School Elite League. He was a captain at the University of Wisconsin, and his Coaches’ Corner columns have appeared in LPH since 1986.